A quiet Brunswick County town with fewer than 7,000 year-round residents, Oak Island is a gem on the North Carolina coast. Known for its 12 miles of beautiful coastline, the town’s population often averages 40,000 in the summer months.

Oak Island was first inhabited in the early 19th century and Fort Caswell was built on the eastern end of the island in 1838. In conjunction with Fort Fisher, Fort Holmes, Fort Johnson, and Fort Anderson, Fort Caswell defended the Cape Fear River and vital Confederate trade routes until 1865 when, after the fall of Fort Fisher to the Union, Confederate authorities ordered its evacuation. The fort was burned as Confederate forces marched away.

In the 1890s the U.S. Army rebuilt defenses at Fort Caswell, but it did not come under fire in the Spanish American War or World War I. During World War II, allied forces used the fort as a lookout station for enemy submarines. The land was later declared “surplus property” by the United States Government and was ultimately purchased by the North Carolina Baptist Convention. It is now used as a retreat and conference center and the location is no longer open to the public.

Oak Island is made up of the former towns of Long Beach and Yaupon Beach, both of which were incorporated in 1955. The two towns were consolidated in 1999 founding the town of Oak Island.

Oak Island features 65 public accesses to 9 miles of sandy beach, a number of which are handicap-accessible. The town wants people with disabilities to be able to enjoy the beach just like anyone else so they offer wheelchairs made especially for rolling in the sand. They even have a floating wheel chair!

The Oak Island Beach Preservation Society protects the area’s natural resources with funds from the Beach Preservation Trust Fund, under the jurisdiction of the Trust Fund Advisory board and a Committee appointed by the Town Council. They clean and monitor the beach, educate the public, coordinate volunteers, and build structures like bike racks and doggie-bag boxes.

During Turtle Season, which begins on May 1, loggerhead sea turtles make their nests along Oak Island Beaches. The town encourages all residents and visitors to become a “Beach Lover” and take a pledge to “keep off dunes and plants, pick up trash, fill all holes, protect sea turtles, and remove all gear from the beach when I leave each day.” Other Turtle-Season rules include “keep beachfront lights off at night, never touch or shine a light on a nesting female or hatchling, keep beach gear away from nests and don’t dig near them.” The town reminds website visitors that “only 1 of every 1000 hatchlings survives to the age of spawning. Every sea turtle needs every Beach Lover’s help!

Oak Island is home to a variety of public parks offering varied activities for residents and visitors alike, including a Municipal Golf Course. Handicap-accessible beach viewing is available at Commissioner’s Park. Malcolm Register Park is perfect for picnicking.

The Oak Island Skate Park was designed by local youth and is supported by community funds.

The 24-acre William “Bill” Smith Park features four baseball fields, a football field, disc golf course and concession stand and is home to the Salty Dog Park. This bring-your-own-water dog park encompasses 45,000 square feet donated by the city of Oak Island. It has separate areas for large and small dogs and is maintained by volunteers and donations.

Middleton Park features a number of sports fields as well as tennis and basketball courts, concession stand, playground, and picnic areas. From May through September, the park also hosts a Free Concert in the Park Series, as well as a weekend Farmer’s Market.

There is always something to do on Oak Island!

Special thanks to our own Catherine Lea for her paintings of loggerhead turtles, Ginger Harper for her photo of sea oats and the beach, Christine Cronick for the aerial view of W. Beach Drive, and Cheryl Kuntz for the gorgeous sunset. Cheryl notes that “Oak Island beaches face South which makes for fabulous sunrises and sunsets over the ocean!” 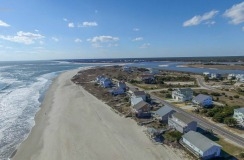 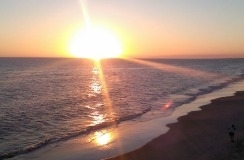